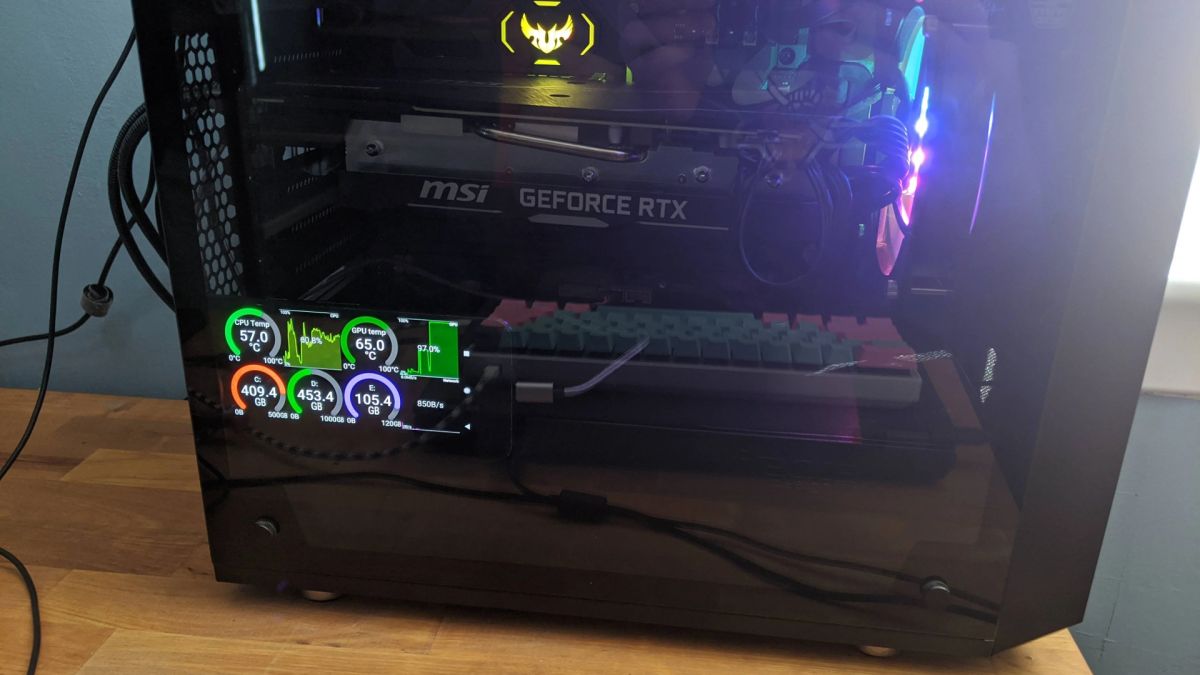 Got an old Android phone you don’t use anymore kicking about in a drawer somewhere? Then you can put it to productive use as a PC system monitor which shows the current level of stress your processor and graphics card are under due to the game you’re currently playing.

System monitoring tools are, of course, nothing new, and there’s no shortage of PC software that can display a readout of your CPU and GPU temperatures, to show how hard these components are working (or indeed other system stats like how fast fans are spinning).

The problem is that when you’re playing a game, you don’t want that readout overlaid on a bit of the screen, getting in the way of your gaming session, or running in the background where you can’t see it.

By running a monitor app on a smartphone, as per a project aired on Reddit spotted by PCGamesN, you can have a completely separate display offering at a glance system readings. Plus this means you’re finding some use for an old discarded piece of hardware, and doing a bit of tech recycling, which never hurts.

The Reddit user who posted this idea, div2691, explains that what you need is an old Android phone as mentioned, and then you must head to the Play store to download and install an app called Remote System Monitor (produced by Trigone). Once installed, you’ll get a link to an app for your PC which also needs to be set up on that machine.

As long as both the PC and the Android device are on the same Wi-Fi network, the phone can pull all the system monitoring info from your rig and display it. The slight catch is that the app will show adverts, but for a tiny donation, you can get rid of the ads and have the monitoring readouts displayed permanently on the phone screen. Pretty nifty, huh?

Then if you’re playing one of the latest demanding PC games, and you hear all the fans kicking into higher gear inside your PC, you can just glance at the phone screen to see exactly how hard your CPU and graphics card are being driven (and which might be bottlenecking the other, or other useful information besides).

The software is capable of monitoring not just processor and GPU temperatures, but all manner of drive details, memory usage info, fan speeds and more.

So, the idea is you can use this old Android smartphone as a permanent system monitor propped up next to your PC or monitor – or even positioned inside your PC case as div2691 illustrates (see the above photo).

We’d exercise a good deal of caution if you go the latter route, though. If you read the entire Reddit thread, some posters are warning about the danger of the phone overheating, or even the potential of the battery exploding if the handset is on 24/7.

Indeed, div2691 explains that they initially had the phone on all the time, but that it got “really hot”, so: “I’ve now set the phone to have the screen always on when charging. But to sleep after 15 seconds inactivity. So when my PC turns off it stops charging and the screen goes off. When it’s in sleep it generates almost no heat.”

The Reddit user also notes that they “had to change settings in the bios to turn off USB ports on shutdown.”

All in all, then, you might want to be careful about going this route – and obviously doing so is entirely at your own risk. A safer method would simply be to keep the phone nestling next to your monitor, as mentioned, perhaps on some kind of stand – and plugged in via a USB port or charger when you need it.

Of course, this won’t do either the phone screen or battery any favors in the long run, but as this is an old handset we’re talking about, which was presumably only gathering dust anyway, it doesn’t really matter.

Another Reddit user mentions repurposing a spare Raspberry Pi to be a system monitor, and funnily enough, a project to do just that (posted by developer Debayan Sutradhar) also popped up on Reddit over the weekend as spotted by Tom’s Hardware. However, note that Sutradhar doesn’t intend to update this project any further.