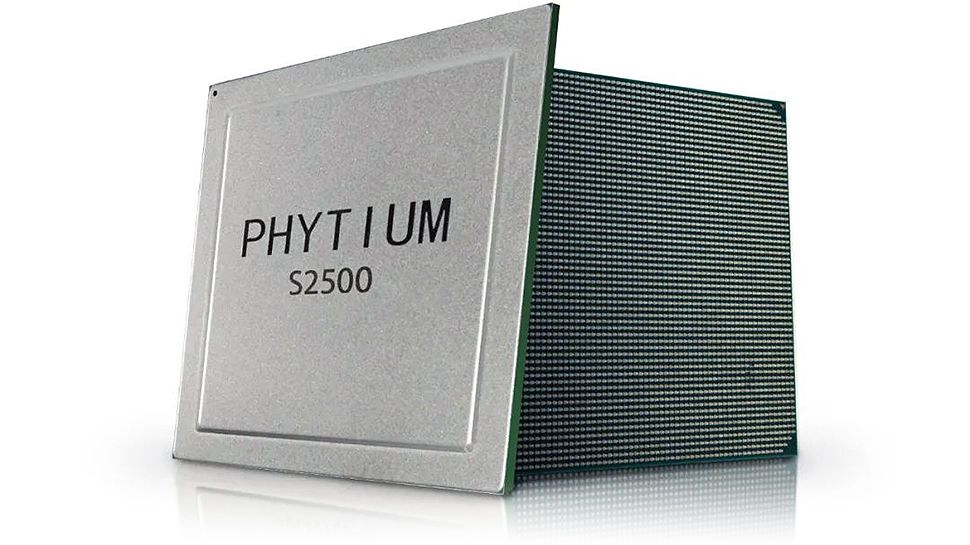 Phytium, a CPU designer from China, has announced a new processor designed for servers with up to eight CPUs. The new Tengyun S2500 chip uses 64 custom ARMv8 cores and has a number of other innovations to improve its performance and resiliency compared to predecessors.

Each CPU core is equipped with a 512KB L2 cache and the Tengyun S2500 chip also integrates a 64MB L3 cache (though we do not know how it is shared between the cores), so the processor carries 96 MB of cache in total. By contrast, Phytium’s previous-generation FT-2000+/64 did not feature an L3 cache.

The Tengyun S2500 has a memory controller (or controllers?) that has eight DDR4 channels at 3200Mbps and supports memory mirroring, a feature supported by Intel’s Xeon CPUs aimed at mission-critical applications.

Unlike its predecessors, the new Tengyun S2500 can work in systems running up to eight CPUs for HPC and other demanding applications. The CPU communicates to other processors using multiple 800Gbps (100 GB/s) interconnections.

Phytium’s Tengyun S2500 is without a doubt a tightly-packed chip, yet the developer does not disclose its transistor count. Meanwhile, the CPU consumes around 150W, up from 90W in case of the FT-2000+/64. Meanwhile, just like its predecessor, the Tengyun S2500 is produced using TSMC’s 16nm FinFET technology.

The new iteration of Phytium’s FTC660 microarchitecture as well as addition of L3 cache are expected to improve performance of the Tengyun S2500 compared to its predecessor, the FT-2000+/64, quite significantly, but the manufacturer yet has to present actual benchmark scores. In any case, up to an 8-way symmetric multiprocessor (SMP) capability support will open the new processor several lucrative markets.

Phytium is currently sampling the Tengyun S2500 CPU with partners that are developing servers on its base. The company plans to start mass production of the Tengyun S2500 in the fourth quarter of this year, so expect servers with this CPU inside to arrive in late 2020 or sometime in 2021.