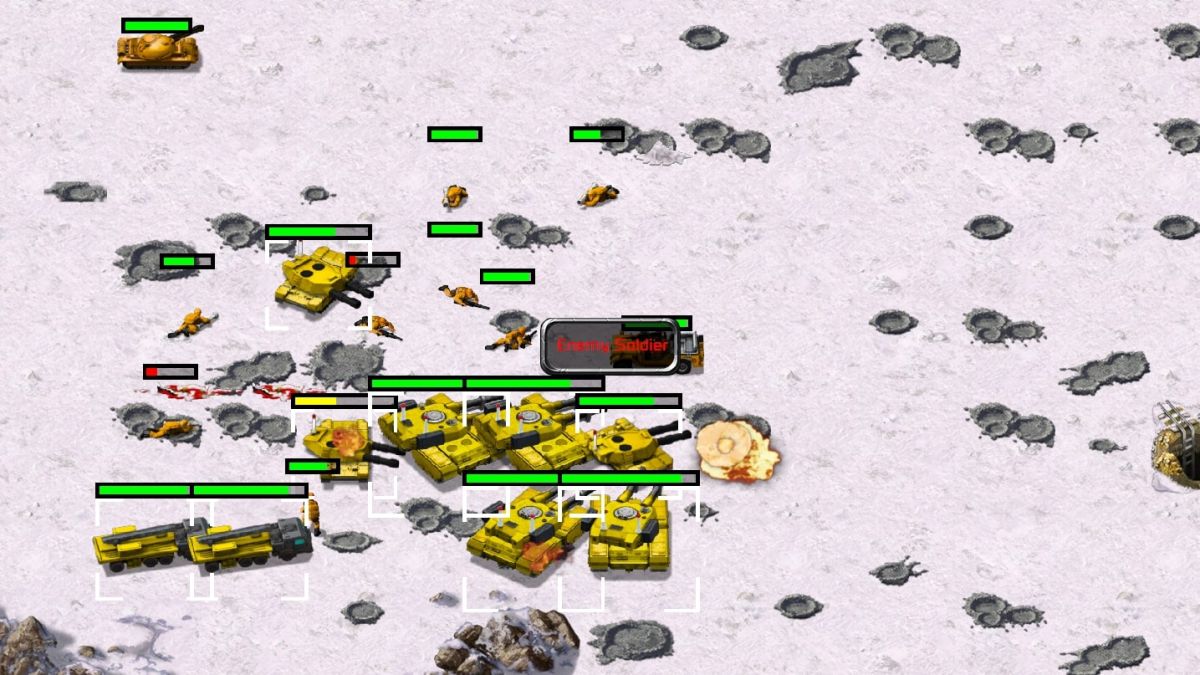 Command and Conquer was everything in the ’90s. In this extremely influential real-time strategy series, you’d build a base, gather resources, raise an army and send them to battle, hoping like hell that the enemy had a slightly less powerful force than yours.

In its second entry, Red Alert, the series’ formula crystallized, and the goofy story went into alternate history: the game starts with Albert Einstein erasing Adolf Hitler from reality, leading to a version of the 20th century where Stalin’s Soviet Union is at constant war with the Allies. Unit types became more colorful, weird and sci-fi, giving the series a personality that’s otherwise so elusive in games about military units blowing each other up.

Command and Conquer: Remastered Collection is an extremely welcome facelift of two ’90s RTS classics that’s clearly been developed with great reverence for their many fans. If you spent hundreds of hours knocking down power plants and ore refineries with mammoth tanks in your younger days, this is a treat. It collects Command and Conquer: Tiberian Dawn (the first game) and Red Alert, as well as each of their expansions.

It arrives at a time when the RTS is barely a force at all on PC, outside of shiny re-releases and Starcraft 2’s ever-strong following. Between this and Microsoft’s extensive efforts to update the Age of Empires series, the future of this type of game seems to be revisiting the past (until Age of Empires 4 finally gets here, anyway).

We’ve played a few hours of Command and Conquer: Remastered Collection, primarily Red Alert, sampling story missions we remember very well and getting into a few apocalyptic rounds of Skirmish Mode against the AI.

It’s an incredibly nice-looking version of an old game that’s been completely refreshed. You can even hit the space bar in the middle of battle to transition from the new art for units, buildings and map tiles into their original visuals, similar to the feature in Halo’s anniversary edition.

While the entire Command and Conquer series has been widely available for some time in an Ultimate Collection pack, compatibility with Windows 10 varies wildly depending on the game. While we’d argue that EA could’ve patched this collection and solved that a long time ago, this new edition feels like far more than a cash-in.

It’s worth the extremely reasonable $19.99/£17.99 price just for the serious audiovisual upgrade, here. As well as the new art pass, which produces fantastic results even when you zoom in on units using the mouse wheel, composer Frank Klepacki has completely remastered the iconic soundtrack for both games. The menus are cleaner and easier to navigate, and the UI generally has been overhauled.

While the live-action cutscenes are still grainy as hell (because the original footage was apparently lost), they look nice enough, and they’re still a lot of fun to watch. Fans will love some of the details added for the remaster, and completing campaign missions unlocks worthwhile bonus content about the making of each game.

As well as the expansions for both Command and Conquer and Red Alert, some memorable secret missions have made the cut, too, along with levels released exclusively for the console edition of C&C (note that we haven’t tested the multiplayer at the time of writing, though).

Our only issues with this remaster have been some graphical stuttering and overly long waits on loading save files, both of which were alleviated when we moved the game to an SSD. The PC we used in this instance is well above the recommended specs, so hopefully this issue won’t be widespread.

The upgrade in presentation aside, these games are exactly the way we remember them, even down to the units’ absurd pathfinding. That’s okay with us. If EA wants to make a new Command and Conquer game down the road, that suits us, but these entries are best left with their quirks intact.

It’s still so satisfying to build a gigantic army in Command and Conquer and use it to knock down an enemy base. So many more lazy afternoons are about to be eaten up by chaotic bouts of Skirmish, as entire bases disappear in a storm of tesla coil zaps, flames, air strikes and ludicrous unit barks.

Even if it’s taken EA a little too long to remember why Command and Conquer was such a monster hit back in its day, we’re really glad that it did. Fingers crossed this is successful enough that we get a similar collection for Tiberian Sun and Red Alert 2 on PC.