Mac Pro 2019: everything we know about the most powerful Mac ever made. 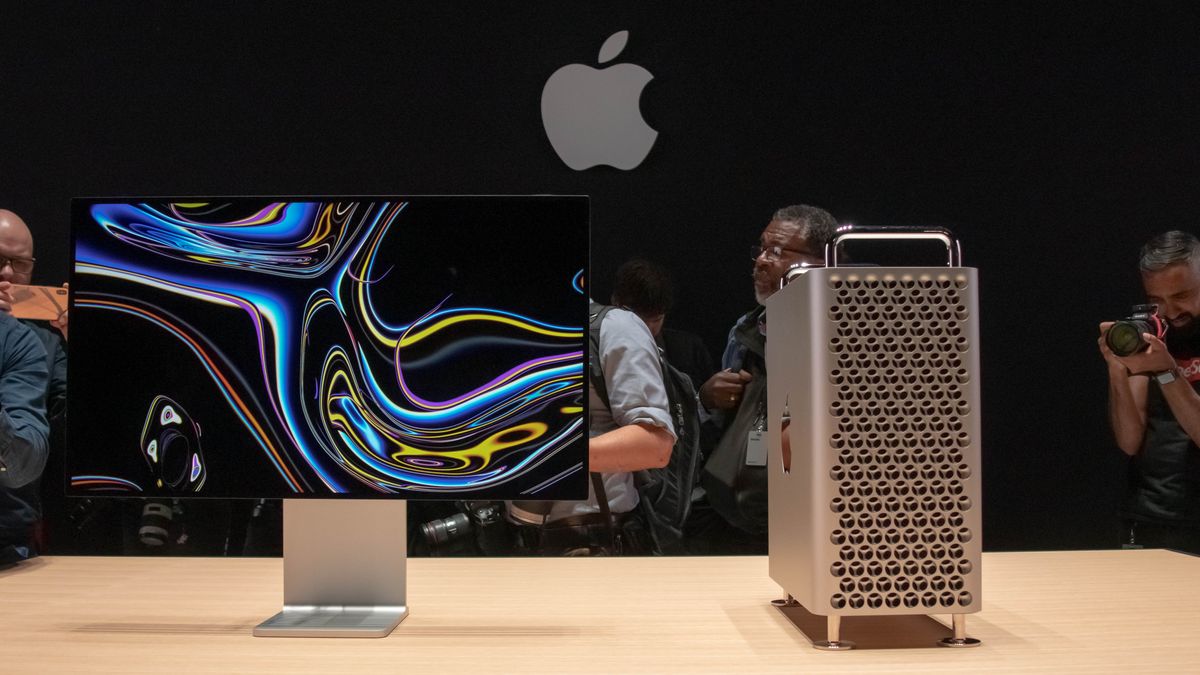 The new Mac Pro 2019 is the ultimate workstation. Unveiled and showcased at WWDC 2019, it’s brimming with the latest and greatest high-end hardware – not to mention, an impressively modular design – making it Apple’s most powerful computer to date . So, while it’s been years since the Mac Pro line has gotten an update, this follow-up is absolutely worth the long wait.

Released on December 10, the Mac Pro 2019 comes with up to a 28-core Intel Xeon processor and 1.5TB of 6-channel ECC system memory. That means that you’ll be hard pressed to find any task that will slow it down or prove too demanding for it. This latest model also allows for modular upgrades. You know, in case having up to a 28-core Xeon processor just won’t cut it.

This time around, the Mac Pro 2019 has abandoned the cylindrical ‘bin’ look of the 2013 model in favor of a more conventional tower chassis that hearkens back to older Mac Pro models. Visually though, the front and back are filled with uniquely designed vent holes, distinguishing it from the more traditional and cleaner look.

The power and design come together when you open up the computer from the top. You can lift off the aluminum housing for 360-degree access to just about every component. All that comes with a hefty price tag, however. So, if you don’t need all that sheer power, it might be wise to consider its less pricey cousins like the iMac Pro.

Along with the Mac Pro 2019, Apple rolled out a new professional monitor – the Pro Display XDR – which comes with a matching design that compliments the Mac Pro 2019’s new look. This monitor features a 32-inch Retina 6K display (the world’s first), and boasts the next level in high-dynamic range (HDR) or what Apple calls Extreme Dynamic Range (or XDR).

This 32-inch 6K display comes with a Nano-Texture surface meant to reduce reflections without affecting the overall image quality.

Additionally, because every single LED is calibrated at the factory level for HDR, Apple is able to deliver high-dynamic range like never seen before. Apple achieves this by using a unique lattice cooling pattern on the back of the display in order to maintain 1,000 nits of brightness at all times – with 1,600 nits of peak brightness. This monitor is able to produce stunning images, as well, thanks to its 1,000,000:1 contrast ratio.

These specs all combine to deliver a new technology Apple has dubbed Extreme Dynamic Range or XDR, the next generation of HDR.

Naturally, the new Mac Pro 2019’s companion screen is sold separately, as is the color-tweaked keyboard, mouse and trackpad. That’s always been the case with Mac Pro configurations – it’s going to be an investment for everything, which also means that it’s not for everyone.

In fact, Apple is targeting the new Mac Pro 2019 at production crews and serious creators. This isn’t a computer made for the average consumer, as you’ll find the spec and price to be far in excess of what you’ll likely need – and can probably afford.

Folks who were indifferent with the older Mac Pro’s design will be happy to know that Mac Pro 2019 has been created to be far more industrial and modular. The Mac Pro’s leanings are more traditional with the combination of brushed aluminum and heat sink holes adorning the outer shell, which unfortunately makes it look like an industrial cheese grater.

It’s brutal and sends the message that ‘this is for working, not for looking good.’ Still, it’s slightly portable as it is rack-mountable, and you can screw wheels on the bottom to cart it around an office or studio.

We’ll get to the performance of the new Mac Pro in just a second, but one thing that’s worth mentioning about the new model is how much innards you can pack inside such a small space.

In fact, one music producer told us that beforehand one would have to use multiple machines to mix a score, whereas those three or four could now be squeezed into the body of Apple’s Mac Pro 2019.

Apple has also fitted the Mac Pro 2019 with a unique cooling system to maximize airflow while keeping the noise down. Even with the massive fans, this powerhouse won’t distract you from your work.

There’s also the benefit of the multiple Thunderbolt ports placed on top of the machine, allowing for easier access inside.

When it comes to specifications, Apple isn’t pulling any punches, stuffing some seriously impressive hardware into the body of the new Mac Pro 2019.

The base model sports a new 8-core Intel Xeon processor, putting a lot of horsepower for multitasking at your fingertips. The Xeon line of CPUs are created for professional workstations – and, this can be configured up to a Xeon processor with an astonishing 28 cores.

The more cores, the better it can run multiple tasks at once – so the processor powering the new Mac Pro will indisputably handle even the most exacting creative tasks without a problem.

Just like Apple’s other prosumer computer, the iMac Pro, the Mac Pro 2019 boasts an AMD graphics card, beginning with the Radeon Pro 580X and up to the Radeon Pro Vega II, which features 32GB of high-bandwidth memory – 1TB/s to be precise. That makes it the highest memory bandwidth of any GPU.

If that’s not enough, you can also load it up with the AMD Radeon Pro Vega II Duo, which features two Vega II GPUs for a total of 64GB of memory – making it the world’s most powerful graphics card.

These GPUs are placed into the Apple MPX Module, which easily slot into the Mac Pro, providing quiet operation while being kept cool by the Mac Pro’s own cooling system.

Remarkably, the Mac Pro 2019 can have two MPX Modules installed at once. This means that if you have the need – and the budget – you can install two Vega II Duos for a crazy 128GB of video memory and 56 teraflops of graphics performance.

All this output needs a lot of power, which is why there’s a 1.4kW power supply driving the machine. However, the noise is fairly muted despite the fans inside, and when seeing it running at full power, we didn’t feel a large amount of heat emanating from the rear, nor heard anything like a light aircraft trying to take off.

This kind of graphical grunt will demolish most video encoding and rendering tasks – even at resolutions of 8K and above. While we’d love to imagine what the gaming capability of this level of firepower would be, this machine is going to be purely of interest to video professionals that have to render ultra-high resolution footage quickly.

Seeing it in real time, you could see and feel the raw power of the rendering capabilities of the Mac Pro 2019. 3D imagery could be manipulated in real time with multiple shading and lighting changes, meaning the need to ship projects off to a rendering farm might not be necessary for many tasks in the future.

One creative artist estimated the raw power of the extra cores gave him around four times the performance previously available, meaning he had far more time to allot to his artwork and creative process rather than standing around to see if the images and videos had shown as intended.

Memory-wise, the Mac Pro 2019 supports six-channel memory and comes with 12 slots, which allows you to install up to 1.5TB of RAM.

Memory-wise, the Mac Pro 2019 supports six-channel memory and comes with 12 slots, which allows you to install up to 1.5TB of RAM.

In a demonstration, this allowed a full orchestra-worth of instruments to be rendered within that RAM space, which means that a rack of PCs can now be swapped out by a single Mac Pro unit, with the output slickly creating right in front of our eyes.

Again, this makes the Mac Pro 2019 a workstation that’s designed to breeze through multitasking. PCI Express slots also make a comeback, with eight in total, to offer plenty of options to expand the Mac Pro’s capabilities in the future.

Even at the entry level with a 8-core Intel Xeon processor with a max turbo boost of 4.0GHz and 32GB of ECC RAM, you should be able to handle most situations. The Mac Pro 2019 is definitely not meant for everyday computing, not that most users would feel comfortable paying such a high price.

The entry model Mac Pro comes with a 256GB SSD, which is the only part of the specifications that seems a bit low since that doesn’t offer much storage space these days.

However, you’ll have the option to upgrade it with up to a 4TB drive. That’s a gigantic SSD and will be a major bonus to any video editors considering this machine. Unfortunately, you will be expected to shell out at least $2,000 (about £1,580, AU$2,900) more to upgrade to such an enormous drive. On the upside, most creative professionals have their own, more powerful external SSD drives anyway, so a smaller storage space isn’t really a deal breaker.

The fact that the new Mac Pro 2019 offers such high expansion possibilities is notable, however. This desktop system boasts eight PCIe expansion slots, so you can keep the Mac Pro current with the latest hardware for the foreseeable future. This is backed up by the new Apple Afterburner accelerator card, which lets users play back multiple 8K RAW video streams. This should be especially handy for video editors that shoot in very high resolutions.

You’ll be able to upgrade the RAM as well. Even if you only pick up the 32GB model (which is expensive enough as it is), the new Mac Pro features 12 physical DIMM slots, so you can upgrade your system memory as your needs change.

Apple will facilitate new graphics cards with its new MPX module, a PCIe expansion card that not only allows you to slot in more powerful graphics cards, but will also feature native Thunderbolt integration and 500W of power. You can have two of these cards in the Mac Pro, allowing you to use two Radeon Pro Vega II GPUs at once.

The best part? Getting access to the innards of the new Mac Pro 2019 is remarkably easy, thanks to the unique chassis design. The outer aluminum housing is also designed for easy expansion, as it lifts off in one motion, granting easy access to the entire system.

These specs certainly sound impressive on paper (if, perhaps, a little overkill for most people), and we cannot wait to see how the Mac Pro 2019 really performs in a full review.