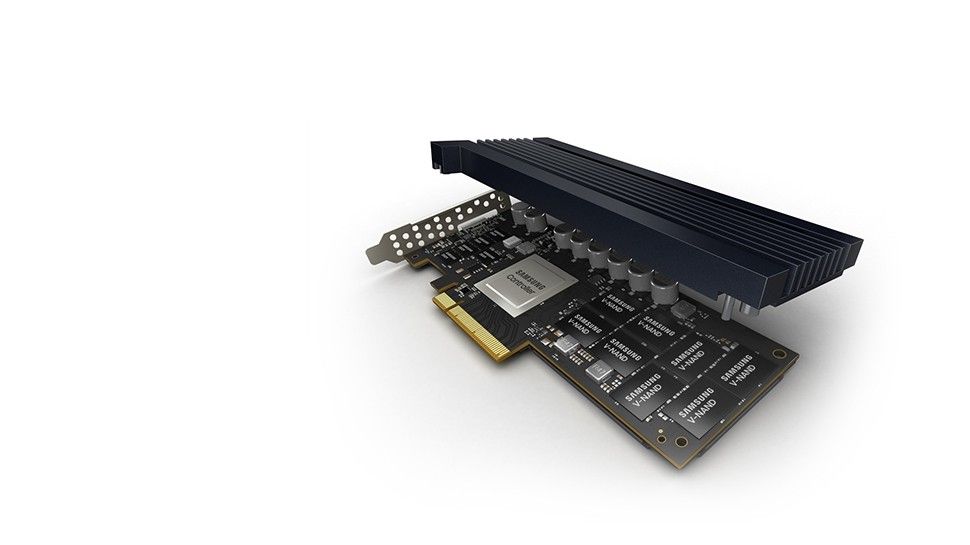 At this week’s OCP Global Summit, Samsung disclosed more information about a new type of solid state drive (SSD) it’s working on – one that only makes sense in a data center context, for now.

When it comes to flash memory, the most common configuration in data centers worldwide is JBOF (or just a bunch of flash), which uses NVMe SSD storage attached to PCIe switches, processors and NICs (network interface cards). There are two rather significant issues with this system, to do with the lack of scalability of the storage controller and limited bandwidth; a classic case of too many middlemen.

EBOF – or Ethernet SSD Bunch of Flash, as Samsung puts it – aims to solve this issue by putting the Ethernet ports (two of them for redundancy) on the SSDs themselves.

These are not your usual Ethernet ports, however, as each supports a staggering 25Gbps – about 25x what most Gigabit interfaces can achieve. Unsurprisingly, that’s only available in a standard SSD (i.e. 2.5-inch), rather than the smaller M2 form factors.

Samsung claims the E-SSD drive will achieve PCIe Gen4x4 performance, or about 1500K IOPS at 4K random read. What’s even more spectacular, though, is that the performance of the drive scales in an almost linear fashion.

Removing the CPU, networking and other bottlenecks means lower latency, higher bandwidth, lower cost, better performance and potentially big TCO savings. Great news for data center operators, but not so great for everyone else in hardware procurement.