This hardware-encrypted USB-C drive is rugged, inexpensive, and can run Windows 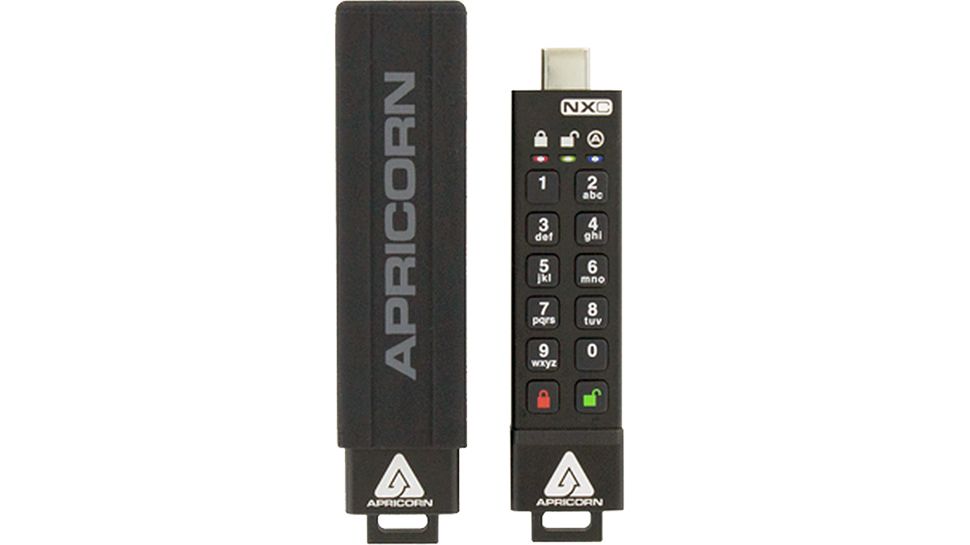 The Apricorn Aegis Secure Key 3NXC drive, which is fast enough to run an operating system, features its own AES-XTS 256-bit encryption chip as well as a keypad to enter numerical PINs. At present, the storage device is FIPS 140-2 level 3 validation pending and the company expects to get it in Q3 2020.

The USB-C Aegis Secure Key 3NXC drive supports read-only mode for those who need to carry sensitive data and do not need to alter it anyhow as well as a read-write mode for those who may need to change the data on the drive or boot an operating system from it. Since encryption is hardware-based, it is seamless for OS and therefore the Aegis Secure Key 3NXC devices are compatible with virtually all operating systems available today, including Apple’s MacOS, Google’s Android, Microsoft’s Windows, and even Symbian.

The firmware of the drive is locked down and cannot be altered by malware or exploits (e.g., BadUSB), which means that the drive itself is secure. Furthermore, the drive has its own battery that charges when it is plugged to a host, so an unlock pin can be entered while the drive is not plugged.

The Aegis Secure Key 3NXC drive comes in an aluminum chassis and is IP68-rated against water and dust. It also comes in an enclosure for extra protection. Measuring 81mm x 18.4mm x 9.5mm, the device weighs 22 grams.

Apricorn, which specializes in hardware-encrypted storage devices, offers multiple versions of its Aegis Secure Key 3NXC drives featuring capacities ranging from 4GB to 128GB. The company does not disclose performance of the storage device and only mentions a 5Gbps theoretical throughput of a USB 3.2 Gen 1 interface, but higher-end Aegis Secure Key 3NXC are probably fast enough to boot an operating system in a reasonable amount of time.

There is one caveat with using Apricorn’s Aegis Secure Key 3NXC drive as a boot drive. Microsoft recently canned Windows To Go in Windows 10 Enterprise and Windows 10 Education (version 2004 and later) that enabled the creation of a Windows To Go workspace that could be booted from a USB drive. To that end, those who would like to use an Aegis Secure Key 3NXC to boot an OS will have to use an outdated version of Windows, or go with a Linux OS.

Apricorn’s Aegis Secure Key 3NXC drive are available directly from the company. A 4GB model costs $59 or €52.45, whereas a 128GB is priced at $179 or €159.13 depending where are you at. Considering the fact that the devices are aimed at various government and corporate personnel who have access to sensitive data as well as hardware encryption, metallic chassis, and other sophisticated features, prices of these drives look justified.